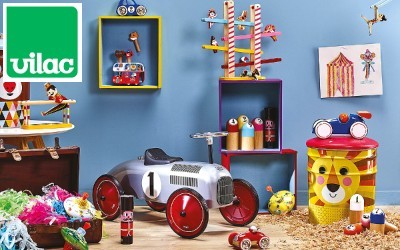 The history of the current Vilac begins in 1911, in the French toy capital, Moirans-en-Montagne, when Narcisse Villet creates a small artisan turning workshop called "Maison Villet".

In 1951, Villet's sons took over the small workshop, which by then already had an extraordinary reputation. They create the "Villet Frères" stores and in 1979 it becomes Vilac, the contraction of the words Villet and Lacquer, the product with which they color their toys.

In 1985, Vilac is bought by Hervé Halgand, who maintains the tradition of wooden toys turned and lacquered, and continues to develop even today, preserving its culture and traditions.

10 years later, the company grows by adding the Petitcollin brand, the last and oldest doll and baby factory in France.

In 2007, Vilac obtained the Entreprise du Patrimoine Vivant (EPV) label and the Know-How label of the Natural Park of the Haut-Jura region.

In 2012, Vilac and Petitcollin were acquired by the France Cartes group, a group to which the JeuJura brand already belongs.

In 2014, Laurent Weisbuch sold the card games business to Cartamundi, to keep Vilac, JeuJura and Petitcollin.

In the heart of the Jura, between mountains, lakes and forests, between Champagnole and Saint-Claude, Vilac continues to create wooden toys in Moirans-en-Montagne, as it has for over a hundred years.

Timeless and unique toys, which continue to make generation after generation dream.

Accept
This website uses cookies so that we can provide you with the best user experience and to deliver advertising messages and offers on the website that are relevant to you. You can read here all the in's and out's of our cookies policy